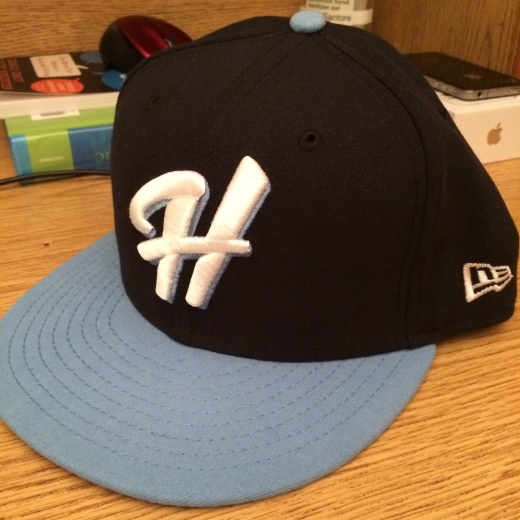 Whenever a new team enters any league, goes through a total re-branding, or moves it is almost a certainty that I will get that cap. The Hillsboro Hops are no exception, moving from Yakima, Washington to Hillsboro Oregon in time for the 2013 season. A Short-Season A affiliate of the Arizona Diamondbacks, the Hops are the only professional baseball team in the Portland metropolitan area, and try to reflect the community they represent. They are so named after the Hops which are commonly used in the beer-making process, which Oregon is known for. According to my friend who used to live in the state, about 1/3 of all beer produced in the United States can be traced back to Oregon. Even their mascot Barley’s name was chosen from a contest in the local community.

As far as non-baseball awards go, the Hops won just about every one they could. The Hops’ branding and logo was named the best in all of Minor League Baseball for 2013 by Ballpark Digest; that is out of 243 possible teams. The odds of wining that award are .413223%. Even their beloved mascot Barley was named the winner of the Northwest League “Mascot Mania” contest. They played their first ever home game in front of a sold out crowd of 4710 at Hillsboro Ballpark, and the fans continued to come. They even lead their league in attendance, giving the Portland area a team of their own.

Barley, the official mascot of the Hillsboro Hops

Since 2013 was their inaugural season as the Hops, no one of note has passed through the system as of yet, but that doesn’t mean the franchise hasn’t had its fair share of notable alumni in the pre-Hillsboro era. Back when they were a Los Angeles Dodgers affiliate, many future All-Stars played for the then named Yakima Bears, including Paul Konerko, Shane Victorino and Carlos González, who have all had outstanding careers at the major league level.

Time will tell whether any current Hops players will reach any success at the Major League level, but former Hops closer Daniel Gibson is currently ranked 20th on the Diamonabacks Top 20 Prospect List, with an ETA to the Majors put at 2015. One of four Hops players to be named to the Northwest League All-Star Game, Gibson posted a 0.56 ERA through 16 innings of work. I, along with many Hops fans, hope to see this guy make it to the big leagues, giving them the first MLB player they can call their own alumni.

Sadly, their inaugural season was filled with mediocrity on the field. Their team batting average was .238, while they hit only 29 home runs in 78 games. The nature of Short-Season A means that most if not all players will be new to the team, allowing for a potentially quick turnaround for the infant franchise. I wear this cap proudly, supporting a franchise that is filled with potential and has the community willing to embrace it.